来源：深圳希玛林顺潮眼科医院 2016-02-29
A 12-YEAR-OLD boy who was stabbed in the eyes in Northeast China’s Jilin Province last October has regained sight thanks to a Shenzhen hospital’s efforts.

The boy, identified as Xiaoshuo, was stabbed in both eyes, blinding him.

Doctors at the C-MER (Shenzhen) Dennis Lam Eye Hospital saw the news report and called the boy’s family, saying the hospital was willing to help.

The boy later came to the hospital in Shenzhen for treatment in October last year. His left eye regained sight after four months of treatment. The injury to his right eye is irreversible, although the hospital performed surgery to improve its appearance.

The head of the hospital, Dennis Lam Shun-chiu, said that Xiaoshuo’s eyes were severely damaged by the time they received the boy at the hospital. However, a weak reaction in Xiaoshuo’s left eye brought hope to the boy and his parents.

The hospital set up a team of experts and provided treatment using both Western and traditional Chinese medical methods. Xiaoshuo managed to see the colors of a Christmas tree Dec. 18.

Lam said that the staff at the hospital had witnessed the boy make progress in regaining sight. The teenage boy can now walk on this own and even recognize Chinese characters.

For the parents, the experience was like riding a roller-coaster. The mother said she did not expect her son to be able to see again.

The boy’s vision is improving gradually and he will be able to read and attend school in the future with the aid of machines, according to Lam. The boy said he would like to become a doctor in the future.

Xiaoshuo was stabbed by a woman in his neighborhood in October last year over a dispute with his parents over a piece of farmland in Bao’an Village, Yushu City in Jilin.

The woman later set fire to her house, burning herself to death. 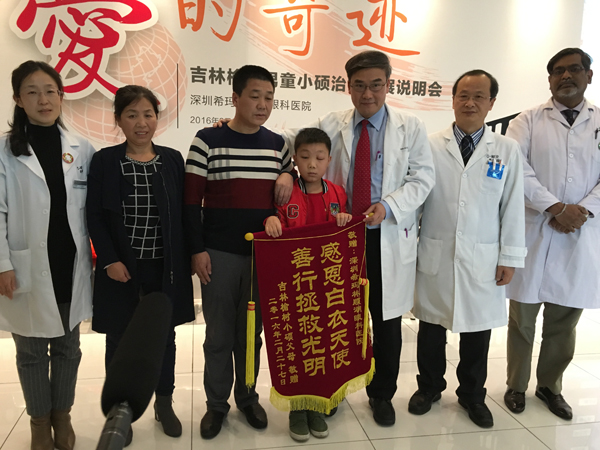